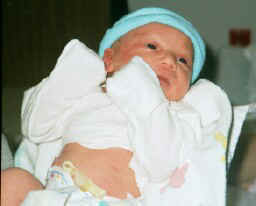 Jared Levi was due to make his arrival into this world on either December 31, 2001 or January 1, 2002 (the doctor and ultrasound tech couldn't agree on the due date).

Like last time, we decided NOT to find out the gender. With Bailey, it was because I really, truly, irrationally did not want a boy (although I seemed to have completely forgotten that the minute he was born). This time, it was because it was so fun not knowing the first time.

If possible, this pregnancy was even easier than the first one. I only gained a total of 10-15 lbs, so I was feeling pretty good. I was more tired, but who wouldn't be when they were as big as a circus elephant and had to chase an active toddler around?!? Of course, since Big Brother made his arrival into the world 15 days before his due date, I was expecting another really early delivery. So, I decided to take the full month of maternity leave offered for before my due date. I needed that time to finish this baby's cross-stitch blanket! The running family joke was that the baby wasn't coming out until the blanket was finished.

I spent the first 8 months of my pregnancy deciding if I wanted a repeat cesarean or not. I finally decided that I did. My doctor wanted me to go into labor naturally, so they didn't schedule the surgery.

I was getting so antsy and I couldn't wait for this baby to come. On Friday, December 21 I was having contractions all night and morning. They started getting uncomfortable and closer together, so we packed Bailey up, sent him to Grammy and Zaydes, and went to L & D. Of course, we got there and everything stopped. We hung out for about and hour, then they made me feel pretty stupid and sent me home. Geez, I know this was my second baby, but I had no labor the first time. I didn't know! Turns out, what I felt was the baby dropping. We got back to my mom's and she said, "Gosh, you are low." I looked in the mirror and she wasn't kidding. Since Bailey never dropped, I had no clue that's what it would feel like. Oh well.

So, now I was depressed, antsy, etc. I kept telling my belly, "You're evicted!" but it didn't work. Bailey even started yelling into my belly button, "Baby, come out!" Nothing worked--not raspberry tea, not the pressure point on the feet...not any *other* ways to kick-start labor

By Monday (December 24) I was going out of my mind. We even braved last minute shopping crowds to go to the mall and I walked, and walked, and walked. The next day was Christmas (not that we celebrate it) and Ryan had to work. We usually do a family movie, but I wasn't up for sitting in the theater. My parents took Bailey for the day so I could relax and work on my scrapbook. I never did get any scrapping done. I started feeling "yucky" with all the classic early labor symptoms and mostly vegged in bed or in front of the TV. I was supposed to go eat dinner at my folks' house, but I called and asked them just to feed Bailey then bring him home for bed. Mom thought it sounded like labor but didn't want to get my hopes up and I thought it was labor but didn't want to say anything after the false alarm. Just before Bailey got home I called Ryan and asked him to leave work in an hour or so. I knew for sure it was labor by then and I was so afraid my water would break early like last time. He worked an hour away so I needed to give him notice if I could. At about 9:30 we called my parents and told them that I was in labor, so be ready for an emergency call if my water broke. We watched TV until about 11, then went to bed. Contractions were still a good 10-12 minutes apart and mild.

Sometime around 5 am I stopped being able to sleep through contractions. Each one would wake me, then I'd doze again. They weren't very strong, but they were 8-10 minutes apart. At about 6:30 they were a little closer together and we called the hospital. My doctor said DO NOT wait until 5 minutes apart because of the c-section. We called and the hospital didn't care. They said they'd send me home if they were further apart. So we waited. Around 8:00 I couldn't deal with Bailey anymore, so Ryan brought him to my parents' house. About 9:00 I was done being at home because I was really terrified that my water would break and it would go fast. We called the hospital and said the contractions were 5 minutes apart even though they were more like 7. And off we went....(much more calmly this time than with Bailey).

I got checked in and the nurse came in to check my cervix. She said I was a good 2 ½, maybe 3 cm. I looked at her and said, "So, you aren't sending me home?" She laughed and said, "Absolutely not." I didn't realize how freaked out I was about another false alarm until right then. We called the family and my mom and sister headed over. We were all hanging out in my room. They told me that the section would probably be around 4:30. At about 2:45 I couldn't talk through contractions anymore. It wasn't bad, but every 4 minutes I had to concentrate. It was so strange because it was like all of the sudden the intensity changed. The nurse came in, looked at the sheet from the monitor, and told me that it would be soon. Sure was--next thing I know we're headed down to the OR.

I had asked the anesthesiologist about the sedative. She said she'd get it ready, but I wouldn't want it. They started the surgery and it was a breeze. No interference from old scar tissue, and the baby popped out with the first push on my uterus. Ryan announced it's another boy and I just *knew* already that it was (because the boy name wed picked, Jared, is after my Grandpa who passed away on Dec. 26, 1987) because of the date. The anesthesiologist asked if I wanted the sedative, but I didn't this time. I think it's because at this hospital, Dad and baby stay in the OR. I wasn't alone. Next, she asked the baby's name. When I told her, she said that it was her second c-section of the day and the other baby was named Jared, too. How funny!

We finished up and my mom, sister, and brother were just arriving back on the L & D floor from getting coffee. They wheeled me back to the room (me cuddling Jared the whole way) and as we passed them I heard my sister yell, "We have a blue hat one." Cracked me up.

I was supposed to stay in my room for about 2-3 hours to recover, but L & D was extremely busy so they got me and Jared cleaned up, we visited with family for a few minutes, then it was off to the Mother/Infant unit. As we were headed out the door I winced (pain--sensation returning--ouch) and the nurse said, "Oh, I'm so sorry. I promised you a painkiller before we moved you." Then she asked if my legs were still numb. When I said they were, she pulled back the sheet and stuck a needle of Demerol in my thigh. YIKES!

After we got up to the room we called my dad. He brought Bailey over and the brothers met each other and exchanged gifts (a Blue's Clues rattle and 2 Blue's Clues bibs for Jared and the I'm a Big Brother book for Bailey).

Jared Levi made his appearance at 3:31pm on Wednesday, December 26, 2001 at Kaiser Santa Clara Hospital. He weighed a mere 6 lbs. 9.5 oz. (And, geez, if someone had told me hed be that small at full term I may have considered not having the repeat C-section!). One look at that face, one peek into those gorgeous blue eyes, and I was hooked! 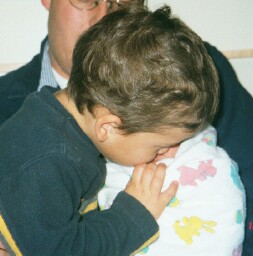 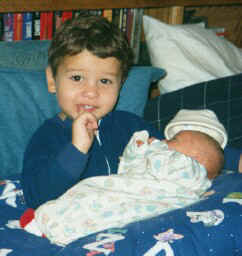 Bailey and Jared cuddling on our first night home