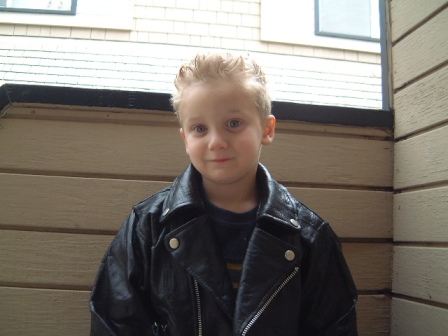 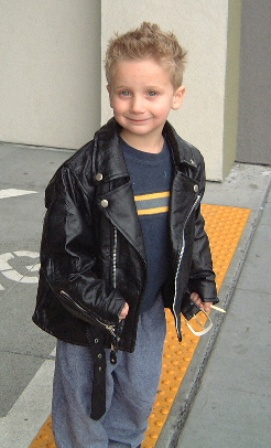 I caved. But, tell me that he doesnt look adorable in the jacket. CmonI dare ya! I really found a good deal. Besides, hell be wearing it for at least 3 years. Really. It is a perfect fit on Bailey right now and Jared is 3 sizes behind Bailey so as long as we take good care of it, the jacket seems like a worthwhile investment. I had to give it to him today. Short story, we had to get out the door to meet my parents at the movie theater and Jared was pitching a fit (about his hair, which I spiked at his request, but then he changed his minddrama queen!). I grabbed a birthday gift and tossed it to him a day early as a bribe to stop the tears. No big deal, really. He knew I ordered the jacket and he tried it on already when it arrived on Friday. He still doesnt know that we got him a child-sized acoustic guitar. Hell open that tomorrow. If he treats it well and stays interested, well get him lessons. Who knows, maybe he really will be a rock star someday. Hes got the hair, hes got the jacket, hes got the instrument

Yesterday was spent cleaning the carpets and shopping for Jareds birthday party. Unfortunately, the large red surfboard that was drawn on the carpet with red marker is here to stay. We tried. Hard. Its permanent. Lovely. We settled the kids down for a campout on the living room floor. Jared went to sleep with the notion that perhaps Santa would forget that we are Jewish and accidentally leave some gifts here. It didnt happen, obviously. He didnt seem to care too much in the morning.

We went out to breakfast (a Sunday morning family tradition) and told them we were celebrating Jareds birthday. He got an enormous piece of chocolate cake. 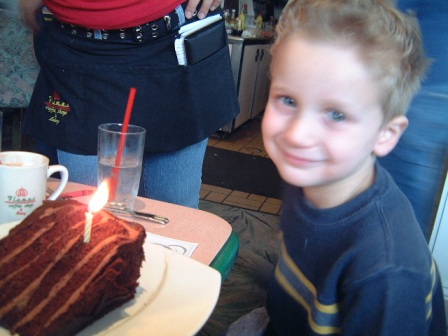 Afterwards we went to see The Producers with my parents, my brother, and my sister. Fucking hilarious! Makes me wish Id seen that when Lisa and I went to New York. I think this is the last time well be able to take Bailey to see something so suggestive without him asking questions. Hes just about at that age where he realizes when he doesnt get a joke and asks about it. There was one part (cant remember which one) where I looked at Ryan and whispered, If your son asks about that one, youre explaining it!

Truth is, I bet Ill end up being the one to give all the sex talks. I mean, Im a middle school science teacher. I spend weeks every spring covering this stuff. The whole time I was going through the credential program, I never dreamed Id end up in front of a class saying things like, You need to use a condom every time. Every single time. Even for oral sex. Then I wait for the grossed out faces and say, Why do you think they come in flavors? After 4 years, I can even do it with a completely straight face.

Wow, and that was a very random topic change.

I leave you with that, while I am off to make 2 dozen cupcakes for tomorrow. Oh joy. Children pumped up on sugar and stuck inside my house because its raining. That sounds like fun! Wish me luck!