"Maybe it's not the moon at all"

In fact, Im positive its not the moon. Rather, its the tacky neon lights of Reno. Wanna see? 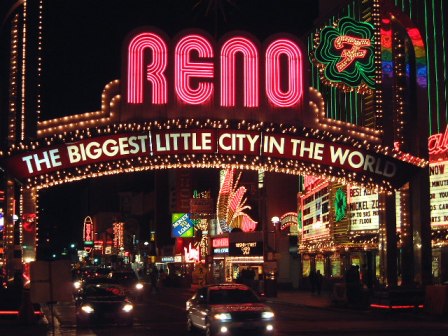 We took the kids to a show last night. Its called Broadway Showstoppers and its hit songs from about a dozen shows. Its all the singing and dancing, none of the talking. The kids loved it. We had seats literally thisclose to the stage. We weren't concerned about Bailey behaving, but we questioned how wise it was to bring Jared. Jared did great, except that he got a bit scared during a few numbers. Anyway, the shows included (not in order): Phantom of the Opera, Chicago, Avenue Q, Movin Out, Mama Mia, Little Shop of Horrors, Stomp, The Producers, Hairspray, The Blue Man Group, All Shook Up, and Good Vibrations. It was a fun way to kill an hour. 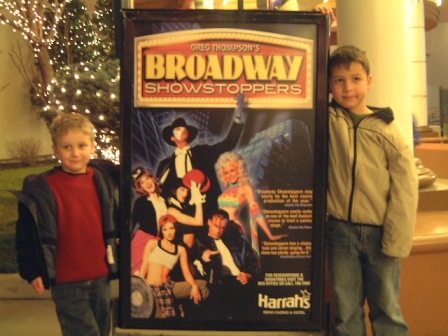 After that, we went back to the room. The boys were starving, so Ryan got conned into ordering them room service. We hung out for a while, then Ryan went to gamble and I went on a crusade to get the boys to sleep. I think it finally happened around midnight.

Which would explain why none of us woke up until after 10am today. The one great thing about Nevadas casino/hotels is that they have wonderful blackout curtains in every guest room! After we got moving and packed up, we finally took the boys over to Circus Circus. Bailey was a total and complete brat except for twicethe two games he won. Jared was a doll and was just happy to play. Baileys sore-loser tantrums were so bad that we left the midway after about 20 minutes.

We got on the road at about 1:30. And we made it home at 10pm. It poured almost the entire way. I think we hit the only no-rain patch during the last half hour of the trip. We got stuck behind so many accidents that I lost count. It was awful.

Remember that baby fever I wrote about at the beginning of the month? Well, I found the cure. 8 ½ hours in the car with a six-year-old and a four-year-old. I think I need to find a way to package that experience and sell it as birth control. Id be richer than Bill Gates!